After leaving the Cabanga Yacht Club in Recife, Brazil, we had some of the fastest days of sailing we have ever had. We were pushed along the north coast of Brazil by a combination of winds and currents going in the same direction as us, and after 5 days of sailing we were celebrating being halfway to French Guiana. We, of course, were already looking forward to arriving five days later. By then, we were passing the delta of the Amazon River, and soon the winds became weaker, current seemed to be confused, and our speed dropped considerably. Bye, bye early arrival.

END_OF_DOCUMENT_TOKEN_TO_BE_REPLACED

When meeting other sailors, we’re often asked if we never get seasick. We have done quite a few longer passages since we left the Canaries, and people assume that we must be hardcore sailors. But in reality, Runa and Esben suffer horribly from seasickness during the first couple of days of sailing. When it’s really bad, Esben throws up every 15 minutes. Mattis and I don’t get it as badly as the others, but we also do get seasick sometimes. So seasickness is something we have to take into consideration when preparing for a passage.

Runa is settled in her bunk 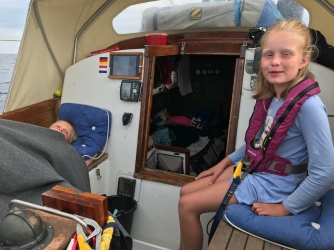 END_OF_DOCUMENT_TOKEN_TO_BE_REPLACED

Our visit to West Africa was very special to us, and we would definitely suggest anybody sailing from the Canaries to Cape Verde to make a stop here (just make sure to check vaccination requirements and malaria risk) – it’s so different and will challenge your perception of the world in ways that the “normal” cruising destinations do not. None of us had ever visited Sub-Saharan Africa before this trip, and we have learned a lot. We have seen a little part of the incredible wild life this continent has to offer, heard about the history of these countries and talked to some very interesting people, offering views of the world so different to ours. END_OF_DOCUMENT_TOKEN_TO_BE_REPLACED