The Dutch owned plantations that used to cover the coastal part of Suriname are long gone, and the rain forest has taken back the fields. But if you take at look at Suriname on google maps, the former fields of the plantations are clearly visible as green squares. One of the few plantations that are still run to some extend is Laarwijk, a small place just on the opposite bank of the Surinam River from where we were anchored. There is no way to get to Laarwijk by land, and many times every day we would see the “bus-canoes” sail by Chip-Chip, bringing people to and from the small village – and once even a car… When we went to the swimming pool in the afternoon, we would often meet a colorful Dutch character, now married to a Surinamese women and living in Laarwijk, where he grows oranges and lemons on the old Laarwijk plantation grounds. He would tell us crazy stories about piranhas, caimans and about working in the Amazon forest, and one day we decided to take the short trip across the river in our dinghy to see his place for ourselves.

The many canals cutting through the country and the former plantations make it easy to see that this country was developed by the Dutch. In Laarwijk we walked along some of the canals in the heat, greeting a few people on the way. Houses are far from each other on the plantation grounds, they are incredibly simple, and not many people live here – most of the population in Surinam live in the Paramaribo area, with access to the big city. Along the path, we saw the plantation trees, mainly oranges, lemons, and a few banana and coconut trees. It’s easy to see that a place like this is easier to keep with slaves who have no right to complain about working conditions. These days, very few people are willing to take on the hard manual plantation work in the heat, and we were told that they mainly work in the morning these days, before the heat becomes unbearable. 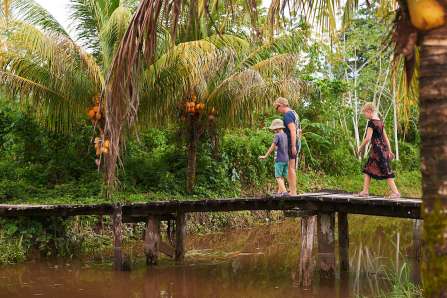 Crossing one of the canals in Laarwijk

It is still possible to control the water

On a later trip, we went to see the Peperpot plantation, a former cocoa and coffee plantation, which has been converted into a restaurant. We found a short hike through on the plantation grounds, hoping to see sloths, but once again, it was the little monkeys that were chatting in the trees around us. As the forest ended, we walked in on the grounds of the plantation houses. These wooden buildings have been beautifully restored back to their original white and green colors. Behind them, we walked through a small village of the former Javanese workers. The plantation only closed in 1998, and some of the former workers still live on the plantation grounds. Neither the Javanese, nor the Indians, were slaves. They were brought to the country as workers once slavery became illegal, but the pay was so low that they had no way to save enough money to go home once they had arrived in Suriname. We felt like the slavery past wasn’t very far away in Suriname; people still had family memories of either slavery, or about how their great grandparents were brought to the country from Asia, sometimes by choice, sometimes not. And the presence of the former plantations, as well as places like these little houses, where the workers had lived until 1998, made everything seem very real. Like a country where time has stood still.

Hiking on the Peperpot plantation grounds

Huts of the Javanese

The former factory has not been restored yet

Javanese workers were also imported to work on the Marienburg sugar cane plantation and rum factory, which is located by the Commewijne River, not far from Domburg. We went there to have a look around, and were greeted by an elderly gentleman, offering to give us a tour on the crumbling factory grounds. He had been born in the Marienburg village, his parents had worked in the factory, and he himself had been a factory welder his whole life, until they closed in 1986. During our tour amongst the buildings, he longingly told us how life used to be for the Javanese. Their life had been completely dependent on the factory. Their small salary was used to buy groceries in the factory shop, and on weekends, they would arrange get-togethers and open air film showings in the factory halls. Life was wonderful and peaceful.

What we heard behind his words was a story of modern day slavery; how the workers were paid so little that there was an uprising already in 1902, with 17 workers being killed. And later, how they were not paid with money, but with tokens that could only be used in the factory shop. These days, the former workers still live in their small houses around the old factory buildings, but there is no longer any work to be had. Some went to work in the bauxite mines up the Commewijne River, but these are also closed now, and life is hard.

Inside the rum factory

Memory for the Javanese who were brought to Suriname

Suriname is not the first country we have visited with a history of slavery, but somehow it felt very real here. Maybe it’s because I had read repeatedly about the history of the country, maybe because the plantations were still there, or maybe it was the stories we were told about the past by the people we met. Either way, it is probably good for us Scandinavians, who do not normally associate ourselves with slave history (though Denmark did possess the USVI until 1917, and did take part in the slave trade), to be reminded of this part of world history, and how it still affects so many people to this day.

One thought on “Visits to Surinam’s past”