Many people wonder about the price of making a trip like ours. And usually, the answer is “it will cost what you have”. Which isn’t very helpful. I have an app on my phone, in which we note every expense we have every day, so we know the price of our trip. And it’s certainly more than we would have guessed, had we estimated the costs afterwards.

We have decided that sharing the boat related costs during our first year of sailing is okay for us, especially as it is helpful for people who plan to go cruising themselves and wonder how much they will need. This is not the total cost of of the trip, but only the expenses related to the boat.

We have divided the costs into three categories: Marina costs, fuel costs and maintenance/boat related costs.

The marina costs also entail anchorages in which we have paid, like in Dakar.

The fuel is diesel for our main engine, gas for our dinghy out boarder and kerosene for our stove.

The broad overview for the lazy ones 😉

In total, we have spent 3330,5 € on marinas, 978 € on fuel and a whopping 5650 € on other boat expenses. The latter includes transport of our mast through Europe and a 2000 euros engine repair during our first month of sailing. To learn more about the expenses, please read on.

How many nights do we pay for per month?

We have on average spent 17,4 nights per month in marinas and 0,5 nights in a paid anchorage per month.

We have spent a lot less nights anchoring for free than we would have thought. On average 5,9 nights per month. But this has increased a lot after we crossed the Atlantic 😉

We have spent 5,8 nights on passage per month, with the number of nights spent at sea increasing gradually from the Mediterranean to French Guiana, with us making longer and longer trips.

The figure below shows how we have spent the nights. 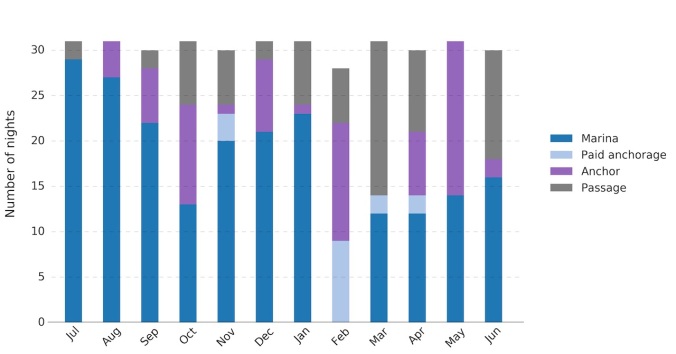 The length of our boat is 28 foot (8,5 meters), and as most marinas charge per length, that means that we pay less than people in larger boats. This, combined with us sailing with kids, has meant that we have sometimes chosen to be in marinas longer than we might have chosen if it had been more expensive or if we had sailed alone.

July to September was mainly spent on the European inner waterways. In Holland, marinas were fairly expensive, but once we moved away from the sea in August and September, it got a lot cheaper.

In October, we visited the Balearics, where we anchored only, and spent time in marinas in Cartagena and Gibraltar.

November was spent in Morocco, mainly in Tangier, but also a few days in El-Jadida, which was surprisingly expensive.

In December and January, we enjoyed the Canaries. The cheapest marina was Gran Tarajal, which cost us around 6 euro per night, while the private marinas were more expensive.

We spent February in West Africa. In Dakar and by the Lamin Lodge in the Gambia, we paid small fees to anchor, but everywhere else was free.

In March we went to Cape Verde and spent some nights in Mindelo Marina, preparing the Atlantic crossing. We arrived at Fernando de Noronha in Brazil after two weeks at sea, and started out our time in Brazil by paying 400 euros for 4 nights by the islands. These nights increase the average cost for the month a lot.

April to June was spent in Brazil. In Recife, we stayed some time in the expensive yacht club, but in Salvador, the marina cost was much less.

Here, we entail diesel, dinghy gas and kerosene for the stove.

In the first year of sailing, we have spent a total of 978 € on fuel, or 81.5 € per month. We have probably motored more than most, considering our choice to go through the European inner waterways, to go 300 km up the Gambia River, and to cross the doldrums twice. But on the other hand, our engine uses around 1,3 liters of diesel per hour, which is very little.

We have not marked how much goes into each of the fuel categories, but once we left Europe, a liter of kerosene cost about 4 euro, and we use about 1,5 liters per week, so that also adds up.

We try to row as much as possible, and the first tank of dinghy gas lasted us from Southern France to Kourou in French Guiana. So dinghy gas is pretty much not a factor in fuel costs for this year.

In July, we left Bremerhaven with a full tank of diesel. Then we mainly used the sails to sail to Amsterdam and again to Breskens, where our mast was taken off. And finally our transmission broke, meaning we spent 2 weeks without moving in Hasselt, Belgium. So no fuel expenses this month.

On the rivers (August and September), we of course used a lot of diesel, while we used less in the following months. In April we filled up the tanks on Fernando de Noronha after motoring three days through the doldrums.

During our first year we have spent 5430.0 € on other boat related expenses, or 452.0 € per month. Considering that we feel like we haven’t really had any problems, that’s actually quite a lot!

When we reached Amsterdam in July, we took advantage of the big city, and stocked up on diesel and oil filters for the next couple of years. We bought mosquito nets, a number of ipad chargers, and many other bits and pieces for the boat.

In Breskens, we had our mast taken off (250 €), and in Hasselt our transmission broke, leaving us with a 2000 euro bill. So the first month of cruising wasn’t exactly cheap.

In August, we paid to have our mast transported to southern France, a convenience, clearly, but we’re happy that we made that choice. We paid to get the mast back on, and we also paid a professional in Port Napoleon to repack our stern gland while we were in the water. We usually do all of our boat related work ourselves, put fixing the transmission and repacking the stern gland are two things we’re happy that we chose to pay for.

In October, we got new impellers in Gibraltar, along with a courtesy flag and some other bits.

In December, while spending time in Las Palmas, we prepared for the Atlantic crossing by getting two new diesel containers, some new reefing lines etc.

Have no idea what we bought in January.

In Brazil (April and May) we got fans for the cabins, we got the alternator fixed and we bought even more iPad cables (they die in a salty environment…).

Other than the transmission problem, we feel we have had surprisingly few problems with the boat. But the numbers certainly add up.

Hopefully it will be cheaper next year 😉