We arrived back in the anchorage by Itaparica just before sunset, but as we went to turn off the engine, the handle came off. So quickly, before the light completely disappeared, Esben had to open the hatch to the motor, stick his head down in the darkness, and figure out where the line that cut off the diesel supply was located on the engine. After a quick look around, he found the right one, and silence fell over the anchorage. The next day, he went in again, to attach the line from the handle back on the engine – it’s nicer, after all, to be able to turn off the engine from the cockpit. As he was doing engine work anyways, he took off the generator to have a look at it. Since we left the Canaries, it had made a strange sound, and Esben had looked at it a few times, but never found the reason. This time it was clear that the wings on the generator had been worn down because the generator had somehow moved downwards. Upon further inspection, we could see that the hole, which the bolt holding the generator goes through, had been elongated. This was not something we could fix ourselves, so once back in Salvador, Esben went out on a mission for a new generator. That mission turned out to be impossible, but he did find somebody who could fix the old generator, so that was a big win.

Salvador is not too far south of the Equator, but the winter storms of the Southern Ocean had started at this point, and could be felt all the way up to Salvador, with relatively strong winds and big waves. Another of these events was on its way, but we wanted to move north, and figured that we could handle the weather. So while Esben was busy fixing the generator, I got the boat ready for a rough passage, tied everything down and cooked enough food to last the next three days. We wanted to leave as early as possible, to be away from land before the strongest winds would hit us, but mounting the generator was of course more problematic than we wanted, and it was afternoon before we left the marina in Salvador. 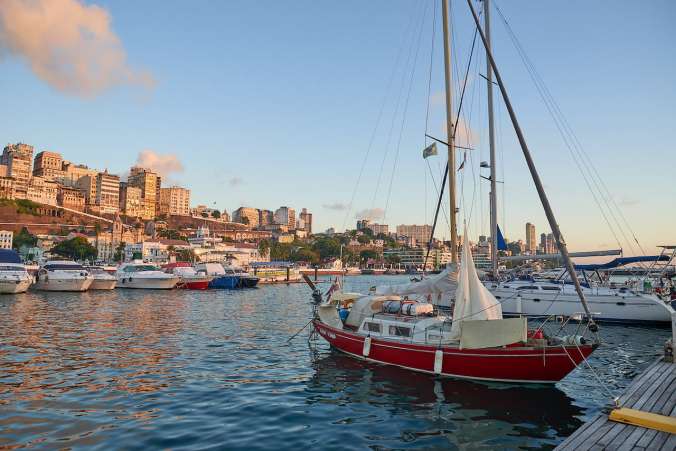 The kids were in their beds, as always in the beginning of a passage, and after putting the third reef in the main sail to prepare for the weather, Esben also went down to get some rest before going on watch later in the evening. The skies became darker, the wind slowly became stronger and it started to rain. The forecast had said that the winds would be coming from behind us, which makes it easier to handle strong winds. But in reality we were beating against the wind. We were soon thrown around, and one big wave threw all of our books out from the shelf – even though they are actually locked in, and they shouldn’t be able to fall out. One of the vegetable nets was also thrown so much around that it came loose in one end, and most of the vegetables ended up in Mattis’ bed. So we had a bit of cleaning up to do down below. Outside, we really felt the crappy weather, but we had reefed so much that the movement inside the boat wasn’t too bad. The next day, the wind continued and it seemed like the sun never really rose. Esben and I just continued taking our watches, grabbing some food on the way in and out, and helping the kids eat something too. The lack of light meant that the battery was getting low – we only have solar panels to charge them. So we decided to start the engine for a couple of hours. That was fine for maybe half an hour, and then the motor slowly stopped. Shit. I shouted down to Esben, that just so that he knew, I hadn’t turned off the engine. The problem was, that if the sun didn’t come out again soon, we would slowly drain the battery even further, and in the end not have enough power to run our navigation instruments, including our electronic charts anymore. We do have a normal compass and small scale charts onboard, but we would much, much rather sail with an electronic chart and a GPS. After a bit of thinking, I started turning off all the electronics that wasn’t necessary, while making sure that our phones were fully charged. If we lost power completely, the phones still have charts and GPS, and the battery will last for a very long time if we only check the chart every now and then. Later that evening we turned off the fridge, and now only powered the instruments. During my shift the next morning, we were hit by a wave so large that it relocated our outboard sideways on its mount, and another wave took our safety ring, which had been mounted on the rail, away. These waves have more power than one would think! Good thing the outboard wasn’t lost overboard.

On our third day out, the wind started to become weaker, and before we knew it, we were drifting along in no wind at all. Luckily, we were so far north that the current was taking us northward, and not back to where we were coming from. But a new problem to worry about, since we couldn’t use the engine, was to not get too close to the shoreline and reefs. And ahead of us we had an oil rig right in our path – but with a speed of around one knot, it would take many hours before hitting it. At one point we saw that the rig  sent a boat out to check us out, but I guess once they saw the mast and sails the turned around.

After drifting for most of the day, we were really starting to miss the engine. We had an idea what was wrong with it – we got one engine advice from my dad before leaving: “If an engine stops, it’s usually because it’s not getting diesel”. In other words, check your filters. Also, we knew that the Brazilian diesel has a high percentage of bio-fuel, leading to a larger risk of diesel pest. Changing filters at sea is not exactly Esben’s idea of fun (and he’s the one with the most experience doing engine work, so he would be in charge of this project), but as the waves became smaller, we decided that it was worth a try. At this point I had already decided that instead of heading for Jacaré, our original goal of the passage, we would be heading to Recife again. Jacaré is located in a river with a strong current and many shallows, while Recife has a big entrance directly to the sea, and we would be able to get in here using sails and anchor in the harbor if we had to. But Esben thought a better idea was to get the engine running again. He started out with the pre-filter, and once it was out, we could clearly see that the water collector was full of water and that top of the filter was covered in diesel pest. The way the boat had been thrown around in the bad weather had probably meant that diesel pest had gotten out of the bottom of the tank and into the diesel intake. So the filter was changed. Esben then drained the bottom of the diesel tank to get as much of the crap out as possible, bled the system of air, and crossed fingers that the engine started when I turned the key. It didn’t. We tried again, and it still didn’t start.

The next step was to change the main filter, which is a whole lot more difficult than changing the pre-filter, as you have to open the hatch in the bottom of the cockpit to get to it – possibly allowing for a wave to enter the boat the same way. But as the sea was now completely calm, we wanted to take the chance. Esben changed the filter in record time, bled the system for air. And this time the engine actually started. What a wonderful sound! And even smell 😉

We motored through the evening without problems, quickly leaving behind the oil rig we had been drifting towards for hours. Then the wind came back, this time from the right direction, and soon we were sailing fast towards Recife, now under sail again, and with a charged battery. The next two days were uneventful, except that we were uncharacteristically fast, sailing 6 knots most of the way. Despite of the working engine, our goal was still Recife. We were fully aware that the diesel most likely still wasn’t clean, and that we risked the motor stopping again at any moment. So sailing in through a river with a strong current was not a great idea.

We approached the harbor in the early evening, but as we had been here before and had the track through the channel on the chart, we decided that we could handle a night entrance, especially since the tide was perfect. Entering the harbor, we were ready to get the genoa out quickly in case we needed it, and to get the anchor out, but the engine was running without issues, and soon we were in the calm waters of the main harbor. As we approached the narrow channel to the Cabanga Yacht Club, we briefly considered anchoring outside of it, but quickly decided to move on, as we weren’t sure the anchorage was safe. The channel into Cabanga is marked with bouys, but it is very difficult to see the markers in the dark, and the water is very shallow outside of the channel. So Esben went up in the front to see better, and I stood with the iPad, showing our previous tracks, in one hand and the rudder in the other and sailed slowly forward while keeping an eye on the depth sensor. The old tracks helped me spot the buoys before Esben could see them, and once we were in the channel, it became easier. Some of the buoys even had light. We made it to the marina without issues, and moored in the same spot as before. Never before have I been so happy to reach a marina.

Looking back, the trip was for sure the least pleasant one we have had, and the only one where we have had problems with the boat. But we find that we handled it rather well, and it’s nice to know that we stay calm, even when things don’t go as planned, help each other sort out the problems that we may have and change plans accordingly. And most importantly, the kids never get scared. They think we can handle anything apparently.

The channel into Cabanga, and the shallows around it