Before heading back to Salvador, we wanted to take a little tour further into the Baia de Todos os Santos (or the All Saints Bay). There never seems to be any wind around here, and we slowly motored the short way to the next anchorage by Ilha de Bom Jesus, which had been recommended to us by other sailors. It was a nice and calm little anchorage, good for swimming, just like the anchorage by Itaparica. We wanted to visit Bom Jesus, a small island without cars, but the relatively strong currents meant that we chose to stay onboard. As we rounded the corner of the next island the next day, on the way to Salvador, it turned out that the wind had picked up during the night. It was straight from the direction we wanted to go, and we quickly decided that it wasn’t worth fight the strong winds and the waves, and went back to our little calm anchorage. The next day, we tried again, and the same thing happened. Good thing we’re not in a hurry. It was only on the third day we managed to get back to Salvador again. We wanted to try a more protected marina this time, as the plan was to make a trip inland to see some more of Brazil. But the first marina we tried, of which we had heard good things from other sailors, told us they were a private marina, and we should rather take the next one. But in the next marina, the Pier Salvador, the pontoons were falling apart, the toilets were disgusting and the people unfriendly, so we made a quick decision and left to go back to the Terminal Nautico before the low tide closed the entrance to the marina. 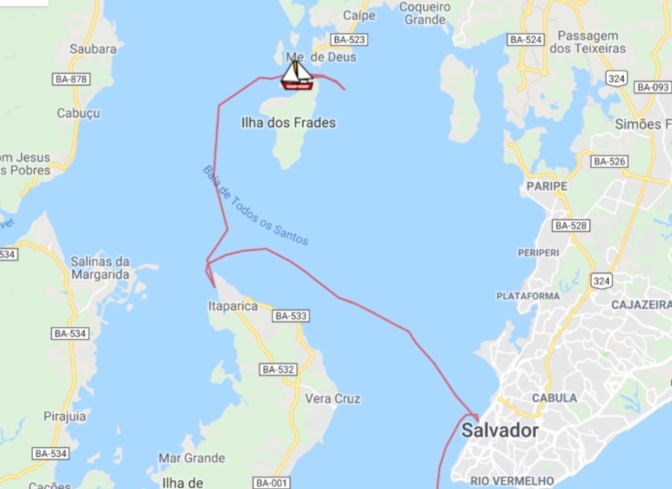 After some research, we had decided that we wanted to visit the Chapada Diamantina National Parc, a mountainous area where they used to find diamonds. And soon we were on our way in a rented car. After leaving Salvador, we drove for hours through large plains, with few farms. The landscape was like taken out of a western movie, and we even saw real live cowboys on their horses. We arrived in our guest house in the evening – with real beds and air conditioning, what a treat. That night we had dinner in a small Mexican restaurant, with a view of the river floating through the town of Lençois. Beautiful.

After a good nights sleep a hearty breakfast, we decided to take a 5 kilometer hike to the Ribeirão do Meio rock slides and pools behind Lençois. The trip took us through a beautiful forest, and we had to cross a number of little creeks to get there. Some people hire local guides, but we figured we were okay with the assistance from google. We did, however, track our path with our phones to make sure that we we didn’t take a wrong turn on our way back. But as it turned out, the hike fairly easy and enjoyable. Arriving by the rock slide, it didn’t take us long to decide that the slide wasn’t something for us. Instead, we bought a cold drink from a vendor, and vent for a dip in the cold and coke-colored rock pools. Later in the day, we saw to guys challenge each other to go down the rock slides. They didn’t hurt themselves, but their ride didn’t make us want to try it out either. 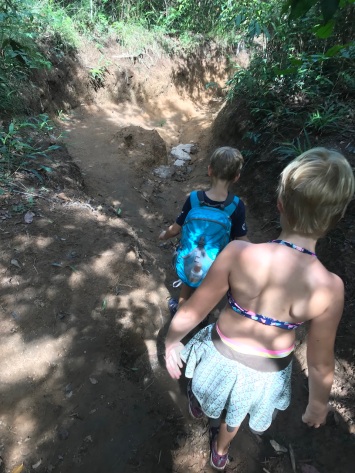 Cool kid with the rock slide in the background

Having a car meant that we could make a tour out to the Lapa Doce Cave, one of the big caves in the parc, the next day. We arrived at a ranch, and could see no sign of the big caves. But then we were given a tour guide, and we realized that the entrance to the caves was below ground. The walk was beautiful, and a bit steep, definitely not for the walking impaired. After arriving, we had actually been a bit worried that the kids wouldn’t be allowed in the cave, but luckily, no-one objected. The entrance was huge, and we all got our torches out as we made our way underground. The cave is part of a much larger underground complex, but we just walked 700 meters through the outer part. Very nice tour, where we stalagmites and an underground river,  though our guide (of course) didn’t speak English. 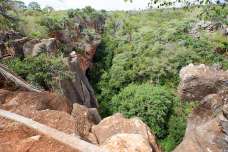 View of the entrance

On the way down

The entrance to the cave

On our last day in Lençois, we decided to take it easy and go to a waterfall not too far from town. Local young men were ready to be our guides, and though we felt a bit sorry for them, the free guides on the internet have taken their jobs away – at least for these small hikes. We came past the first waterfalls, but decided to move on to the next one, and we weren’t disappointed. As we made our way around the last bend, we saw the beautiful little Cachoeira da Primavera waterfall in front of us. We spent a lovely  morning in the water, and when we came to to our cabin, we all agreed that the hikes had been exactly what we wanted for the trip. We could easily have spent a lot more money on multiple-day trips in the park, but it would have been too much for all of us. The way we had done, we were free to make our own choices along the way, plus, it was relatively cheap. All in all, it was a perfect holiday from our boat trip – though we didn’t find any diamonds. 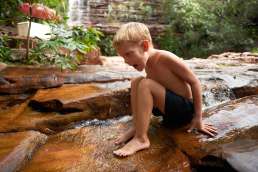 The water is kinda cold

2 thoughts on “Of anchoring and diamonds”