For safety reasons, we had been a bit apprehensive about anchoring on our way down south to Salvador, but after talking to Theresa, an experienced sailor from Recife, we headed towards Suape. Suape is a commercial harbor located 20NM south of Recife, and next to it you can anchor behind the reef. We ended up arriving in the dark, because we had to wait for the high tide to leave the marina. The water shallows very quickly behind the reef, and it wasn’t that great as we didn’t know the place at all. So we ended up already leaving the next evening, after spending the day swimming in the warm water. Our next goal was Maragogi, a sleepy holiday town with some natural pools in the reef. Theresa had shown us pictures from their last trip there, and we were looking forward to this place. After a night of sailing we headed for the waypoint where there was supposed to be an opening in the reef. We arrived at high water, so the reef was completely covered by the sea everywhere, and it was impossible to judge by eye if we were heading for the right place. We lowered the speed as the depth decreased, and in the crystal clear water we could clearly make out the coral heads below us. Esben was standing in the front of the boat to warn me if the coral became too shallow. But it was impossible to see. Looking down in the water one would think that we were to crash into all the corals, though the depth in reality never became shallower than about 3 meters. And then we were across and could head for the next waypoint – making sure that we stayed in the channel between the outer and inner reef. Imagine doing this without GPS and electronic charts – I am pretty sure we wouldn’t be brave enough to try it out like that… 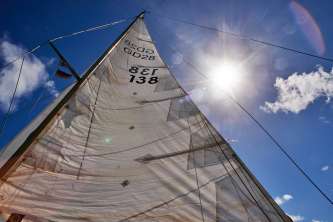 Dust from West Africa is slowly washing away 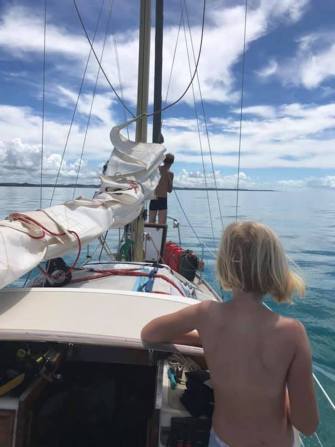 We anchored between the many tour boats, very close to the beach, and blew the small dinghy up to go to land. Mattis had developed an ear ache after all the pool time in Recife, and he and I went out to find a medical doctor, while Runa and Esben stayed by the beach. After asking around, we soon found a small medical house where a nurse had a quick look in Mattis’ ear, and after a bit of waiting we were invited in to see the doctor. Nobody spoke any English of course, and with my poor Portuguese it was difficult to communicate, beyond me pointing at his ear and she looking and saying that yes, it was clearly infected. So to help she called her husband on whatsapp, and he helped her explain the three types of medication we would get for Mattis, and how often and how long to give it to him. In the end we had talked to all the staff in the place, who found it quiet amusing that we had sailed to their town, and showed them how we try to learn Portuguese using the app Duolingo. Everybody was very friendly, and we felt well taken care of despite of the language problems. Plus, it was all free. Only problem with the treatment was that Mattis wasn’t allowed to swim until the ear ache was gone… 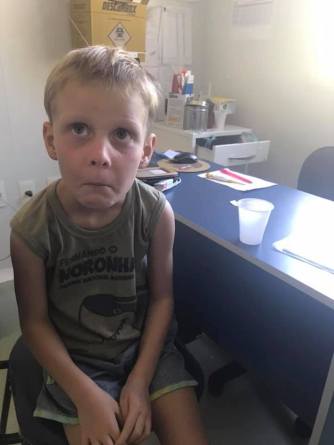 Waiting to see the doctor

The next days were spent relaxing on the boat and on the beach. The kids spent hours playing on the beach and in the water, and the local waiters tried to get us to understand Portuguese by speaking very slowly and loudly to us. It didn’t work, but we got along with well them anyways. They seemed to be amazed that we had come to their country by sailboat, as were the local fishermen and tour operators. One day, went out to the reefs to visit the local highlight, the pools in the reefs. Unfortunately, they are visited by many people every day, and they were completely worn down. But we did, nevertheless, so some snorkeling with some very pretty reef fish.

There’s no jetty in Maragogi, and during our stay here we never got our big dinghy out, but just used the small one, which only has space for three of us. So every time we went on land, one person had to swim. Not a problem, as the water was warm and generally calm. But after a week of bobbing around, not doing much at all, we got the boat ready to move down to Salvador, a big city located by a large bay, nice for some sailing.

Getting ready to swim out

Looking for manatees with homemade yoghurt and müsli in Salinas, Puerto Rico. After arriving, we learned that a PR was hit by an earthquake not far from here, but we were at sea, and didn’t feel a thing. #puertorico #salinaspuertorico #sejlerliv #langturssejlads
Beautiful days of surfing in Culebra 🌊🏄🏼‍♀️🏄‍♂️
Breathtaking view of Mount Pelée on our trip around the island 🌋 we feel incredibly blessed to have the chance to go traveling and experience so many amazing places 🌞 #sailingchipchip #martinique #mountpelee #nomadfamily #sailingfamily
Welcome to the Caribbean 😉🌊💦🌬 we were hit buy a squall right in the unprotected channel between Bequia and St Vincent - at least the rain is warm 🌞 #sejlerliv #langturssejlads #greatdane28 #cruisinglife
Passing St Vincent on our way north. Almost expected the pirates to appear from the mist. #caribbeancruising #sejlerliv #sailingchipchip #stvincent #langturssejlads
Early morning moment with Mattis on the way to Tobago Cays #kids4sail #sejlerliv #sailingchipchip #langturssejlads #nomadfamily