From Fernando de Noronha, it was a “short” 350NM sail to our next stop, Recife, a big city on the main land. The currents run quiet strongly along the south American coast; south of Recife the currents go southward, and north of Recife, they go north, meaning we had the currents against us on our little trip. So we stayed out far from the coast, and slowly made our way south. The weather still behaved, and the four days the trip lasted went by as a continuation of the Atlantic crossing; we had the routines in, the kids knew when they were fed and when we would read out loud for them, we caught a couple of fish. We didn’t go fast, but at least we had a bit of wind and could go by sail the whole way. And then we were in Recife.

In Recife you can choose between the rather glum-looking marina, Pernambuco Iate Clube, across from the city centre and the much more expensive Cabanga Yacht Club. We chose the latter – they have a swimming pool after all. The entrance to Cabanga is long, narrow and shallow, so we anchored in the harbor to wait for high tide. While we waited we waved to the fishermen passing by us, and a sailboat from Cabanga stopped and asked if we needed help, and informed us that we were probably good to go in already now. So in we went, and found ourselves in the middle of the 70thanniversary party of the yacht club. People waved and welcomed us to the club, and soon the kids were in the pool, while we ordered a cold caipirinha in the bar. Nice that the boat was in calm water again. 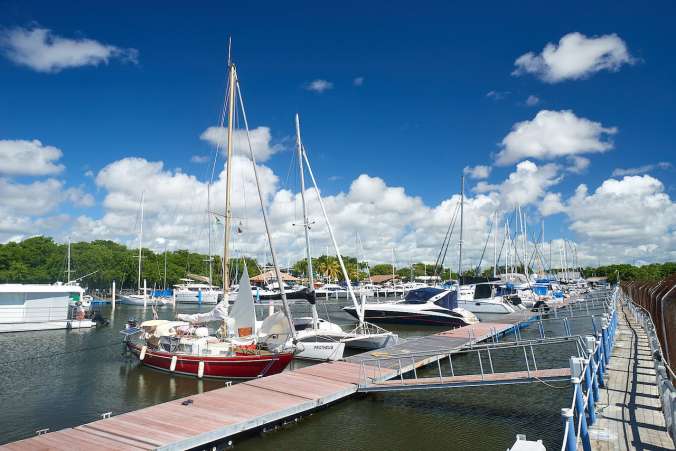 On our second day in Recife, Mattis turned 6 years old. He had wished for a day in the swimming pool, so that was easy. We had pancakes for breakfast (of course) he opened presents. And as both he and Runa had gotten LEGO for their birthdays (Runa’s was celebrated on the Atlantic crossing), we took the sets to a table by the pool, and they spent a couple of hours building LEGO. The rest of the day was spent in the pool playing with the local kids. A great birthday. 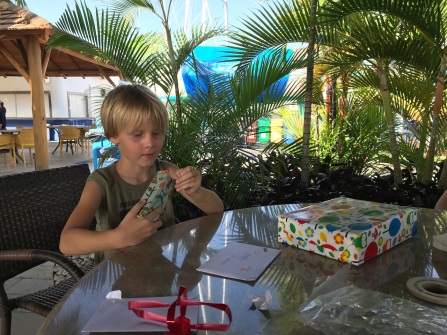 Building LEGO. This led to a few new friends who came to check out what was going on 😉

Entering Brazil, a sailboat needs to clear customs, and as that wasn’t possible in Fernando de Noronha, we prepared ourselves for a long day in public offices (with long trousers and sleeves and proper shoes) and made our way to the city centre. When we finally found the entrance to the port area, the guard wasn’t keen on letting us in. Speaking Portuguese would definitely be a help in Brazil. But finally, we were shown the right office, and after two ours of talking through google translate and a lot of waiting, we had our official customs document. But the people were very nice everywhere, so all in all it wasn’t a bad experience at all. 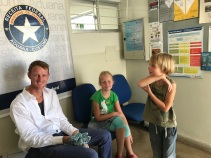 At the customs office

Lunch in the theatre

And dessert in a fruit stall

The restaurant – an old theatre

We also have to check in with the Capitania, the harbor master, in each Brazilian port we enter, so we weren’t quiet done for the day. But first, it was time for some lunch. We found a little restaurant in an old theatre, where it seemed that half of Recife were having their lunch. A cool little place, the walls decorated with theatre masks, and the street outside with colorful little umbrellas and flowers. The food was also very, very good – loads of fresh vegetables – something we hadn’t really had since Cape Verde. So we were a happy bunch making our way to the Capitania, and became even happier when it turned out that the formalities were quickly taken care of, in English. And then the kids went back to the pool in the yacht club.

To see Chip-Chip’s most recent position, click here and scroll down.