The anchorage by Fernando de Noronha was not exactly calm, with the big swell coming in from the Atlantic, making Chip-Chip feel as though we were still under way. But we were happy to be anchored below the impressive mountain that can be seen all over the island, and with a view to lush shores. Esben, of course, volunteered to make pancakes for breakfast to celebrate our arrival. Quite the feat in the rolly seas. 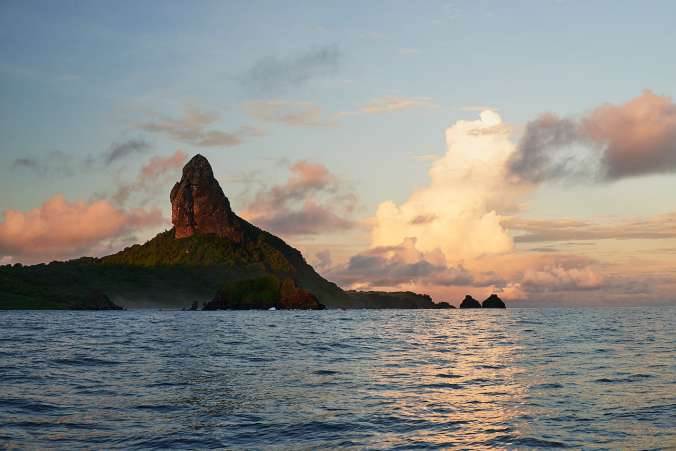 And then it was time to get the dinghy out, getting the outboard on it, and getting everybody onboard without dropping people or outboard overboard. Not so easy.

We motored in, waving to the many day trip and dive boats we passed while they were getting ready for their day. The Brazilian flag was waving everywhere, a flag we usually see at football games or beach parties, and it felt completely surreal to actually be in this country after crossing the Atlantic in Chip-Chip.

When we approached the landing place, the men waved us in, showed us the best place to leave the dinghy, took our lines, helped the kids get on land and welcomed us to Brazil and Fernando de Noronha. Such a nice welcome, and we couldn’t help but notice this genuine (normal?) help, for which nobody expected to be paid, such a contrast to West Africa.

It turned out that the harbor master was not in his office this morning, so we took a walk around the beach in the heat, unfortunately without any money to buy a coconut, and then we were finally let into the office of the harbor master. Here, we were offered coffee, which was so sweet that even the kids liked it, and then an interesting conversation started. He didn’t speak English, and we didn’t speak Portuguese, so the whole conversation happened through google translate. He told us all the rules of the national park, apologized for the price of the stay (just about 100 euro per day) and called the immigration police to stamp our passport. When all the official parts were over, we got some more coffee, and then he told us where to find the bus, the supermarket and an ATM. 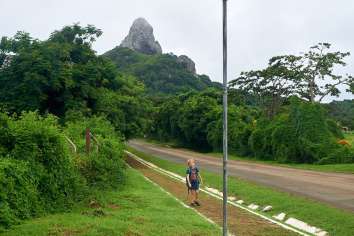 Walking back to the anchorage

A drink in the shade
It turned out that the supermarket didn’t sell any fresh produce, so we just got some bread, candy and juice, went out to get a drink in one of the restaurants, and then it was time to get back to the boat for a good night’s sleep.

Fernando de Noronha is beautiful, with some of the world’s best beaches, and most people on the island make a living from tourism. We decided to take the bus to the other end of the island, to see the turtle beach. Half the beach is closed off for people to let the turtles have some peace, so we were only allowed to snorkel beside the restaurant. We all took some long swims, but the water was not clear enough to see much this day, so in the end we played on the beach and had a drink and a snack in the bar, enjoying the beautiful surroundings. 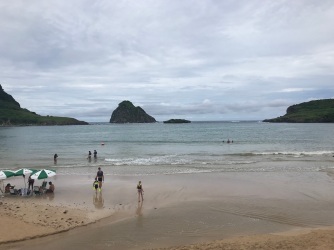 Snorkeling in Baia do Sueste 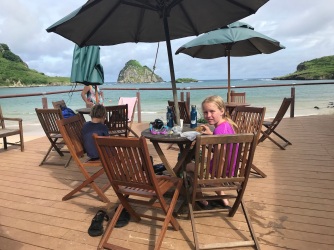 The next couple of days pretty much followed the same pattern; swimming and beach life. We wanted to visit the most famous beach on the island, but Runa asked with fear in her voice if that was the beach with the latter? We had no idea what she was talking about, but then she reminded us that we had watched the Delos Youtube videos from Fernando de Noronha, in which they visited a beach they had to climb down to. And yes, she was right, so we decided to stay on the local beach, where we all saw turtles and sharks while snorkeling, so it wasn’t bad at all. 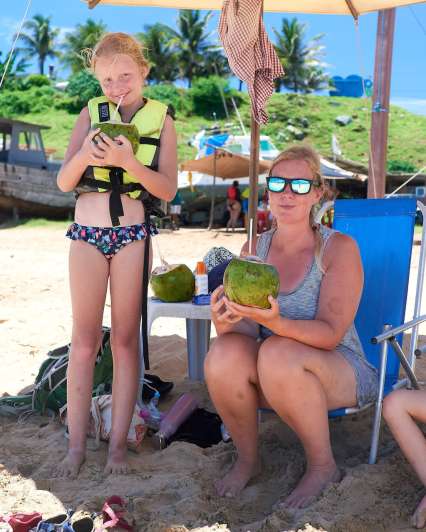 There were turtles even close to the shore 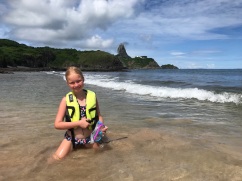 Runa saw a shark for the first time

The turtle is being tacked so the scientist can follow it
We learned to use the local bus, where we met many nice people who wanted to talk to us and give us advice, but unfortunately, we mostly didn’t understand a word. Would have been awesome to be able to speak some more Portuguese. We had worked quite hard with duolingo, but “Obrigada” and “Bom dia” just isn’t enough to have a conversation. Not to speak of “Eu como uma maça” (I eat an apple). 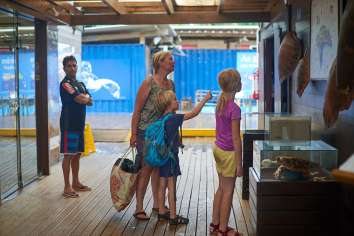 We went to see a turtle conservation centre 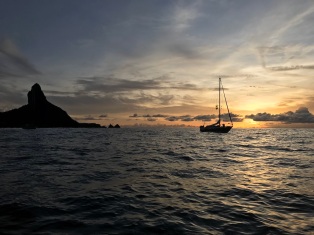