As we made our way further up the river, the water became fresher and the wildlife changed. In the saltwater section, the river banks had been covered in mangrove, but now the vegetation became more like a jungle, and we were beginning to feel like we were sailing in an African movie set. As the sun started to set, the air became alive with birds returning home and as we motored on to find an anchorage for the night, we were all on deck to watch the spectacle. 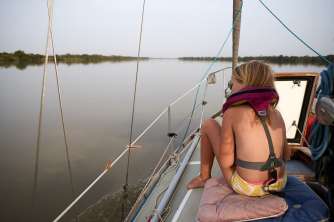 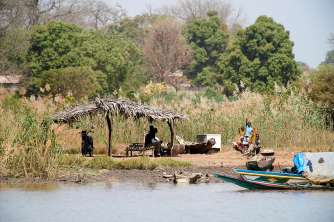 The further we sailed upriver, the more primitive the villages also became. Close to Banjul, the houses looked like what we’re used to, but now, grass and mud huts dominated the few villages we passed. As had become the norm, we simply anchored close to the river bank, and settled in with our evening chores. A fisherman in a dugout canoe, came to greet us. Strangely, we only met Senegalese fishermen on the Gambia River, so here we were back to trying to communicate in French. After talking with him for a long time we finally understood that he was asking if we maybe had some rain trousers he could have, because his legs were constantly wet from pulling the nets in from the water. We couldn’t help him, since Esben only owns one pair (which are no longer water proof at all anyways), but this was the first time we had been asked for something so obviously helpful on an everyday basis, a nice change from being asked to give people iphones, a ticket to Denmark or toys and chocolate. 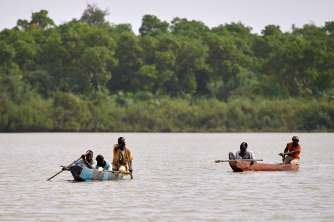 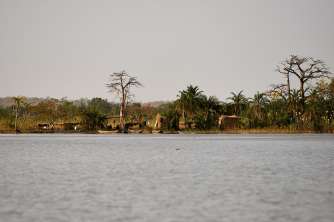 On the river, the tide is quiet strong, and we sailed only when the current was weak or going into the river. So the next day we chose to make a midday break between two little islands which is supposedly home to hippos. We got the sunshade out, and started school in the cockpit. But soon concentration was gone, as a dark head showed up further in between the islands. We took turns looking at and for the hippos in the water, and traditional school was pretty much over for the day – but seeing hippos in the wild also counts as school onboard Chip-Chip.

As we continued towards the Baboon Islands, a nature reserve in the river, Esben suddenly pointed towards the shore, where a hippo pair with a baby could be clearly seen out of the water. We sailed as close by as we dared – these animals are big and heavy and aggressive – and felt very lucky to see them so close to us. Later, we saw what looked like a piece of wood, moving across the river, and as we got the binoculars out, it became clear that we had met a crocodile. This part of the river was definitely our favorite part so far.

We sailed close to the bank, moving in to the anchorage we had chosen for the night, and suddenly the trees became alive with screaming baboons. They were clearly not impressed with our choice of anchorage, and Esben and I looked at each other and wondered if they swim? We figured that they would probably stay on land, and calm down once we had settled in. And they did. And once again we had a beautiful quiet night under our mosquito nets. 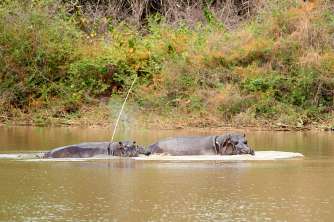 Do you see the baby? 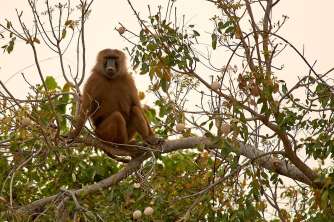 The leader of the pack is keeping an eye on us

When we reached the town Jang Jang Burreh (previously Georgetown), we had sailed more than 300 kilometers into Africa. Here, the river becomes narrower and shallower – and an electrical cable hangs across the river preventing us from sailing any further (or at least we were not adventurous enough to try and get under it…). We anchored out of reach of the ferry, next to a Dutch sailboat. This was only the second sailboat we had seen on the river, and the other one we just passed, so it was nice chatting to them. Soon we were all on our way to town, where we were introduced to their favorite little restaurant on the main street. While we talked about our experiences on the river and our next plans, a whole wedding party was waiting for the bus on the street next to us, with women dressed in incredibly beautiful and colorful dresses. The town is actually more of a village than a town, with some rundown warehouses by the river left by the British, an old wooden house build by the first freed slaves, and a market. Generally, sailors will say that getting food when you travel the world is not a problem, everybody needs to eat after all, but for us, it had not been too easy finding food on the river, it was simply too remote, and when there was food available, the choice would be very limited. So we made sure to get some vegetables and eggs on the market, to top up our dried and canned stash in the boat. By now we had gotten used to a lack of change when we wanted to buy something, and we had learned that the way to deal with is to simply buy a bit more, until the price fits with the Dalasi bills you have.

After our grocery run, we decided to start our trip back to the sea that same day, in order to spend a night close to the nature reserve. 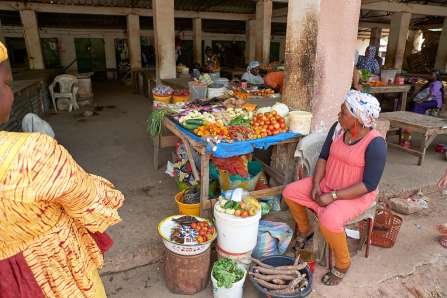 Fresh vegetables on the market

Wedding guests waiting for the bus

To see our current position, click here and scroll down.