An hour after leaving Gibraltar, an alarm went off. This time we knew where it came from – the engine was overheating again. After a bit of discussing back and forth, we ended up continuing very slowly towards Tangier. This would keep the temperature of the engine down, and we would be arriving early the next morning. We could have gone back to Gibraltar, but we knew that bad weather was approaching again, and we preferred to spend that time experiencing Morocco rather than being locked in Gibraltar again.

The strait of Gibraltar is not the easiest place to sail; theres the tide, strong winds and a fair amount of traffic, but with one person keeping an eye on the chart with the AIS positions of the cargo ships (which tells us if we are on collision course) and the other person steering, we made it across the “highway” without any issues.

In the marina in Tangier we experienced the bureaucracy of checking in to a foreign country for the first time. There appeared to be a large number of staff at work, but they were mainly interested in their mobile phones while we waited for something unspecified outside of the immigration office. But finally we got the needed papers and stamps, had the boat searched (very lightly) and then we were given a berth in the nice looking marina.

It soon turned out, though, that those who built the marina had put their effort into the things that you can see, but didn’t care if it actually worked. The pontoons had nice new keycards, but they cards couldn’t open the doors, the staff couldn’t use the computers in the offices, because when it rained, it dripped through the roof, and in the restrooms, one shower only had cold water, the next didn’t have light, and the third couldn’t be locked…

But we soon made our way out towards the medina in this new country. Here, people wanted to sell us everything, and it didn’t take many minutes before Runa had found a dress she desperately wished we would buy. Esben wasn’t impressed, but soon he was faced with a little shop selling vintage camera equipment, and I deemed it necessary to remind him that he already has quiet a bit of gear onboard Chip-Chip (and a lot more at home). Finally we made our way to the vegetable marked, where we ended up paying way too much for some bread and veggies for our dinner that night, and where we made sure to get some fresh peppermint leaves for our breakfast tea the next morning. A must if you are in Morocco! 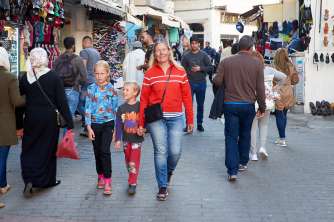 In the medina of Tangier 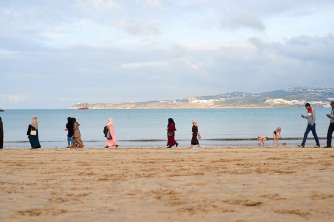 Different cultures at the beach

The not so great weather continued, and we realized, that if we wanted to make a trip into Morocco, which had been the plan all along, we might as well do it from Tangier. Traveling in Morocco is not as straight forward as in Europe, but after some discussion back and forth, I booked a room in a small hotel in the blue city of Chefchaouen for the next evening and we got Amal in the marina office to help us rent a car. We got the guys in the marina to keep an eye on Chip-Chip while we were gone, packed everything we thought we would need for the next ten days (like toilet paper and water), and were ready to meet our new car. Much to our surprise, the car looked great (we heard some pretty scary stories about Moroccan car rental), and we were off towards Chefchaouen. Esben was the designated driver, and he was soon put to the test; a roundabout with 6 lanes, and people zooming in and out between each other. He narrowly avoided a car that took a turn right in front of us, and we escaped out in the normal city traffic. But by now he knew what to expect, and was ready for the intuitive driving style of Morocco. 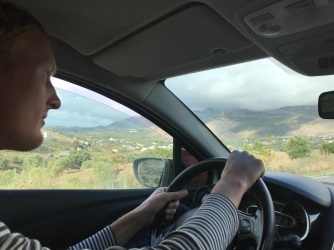 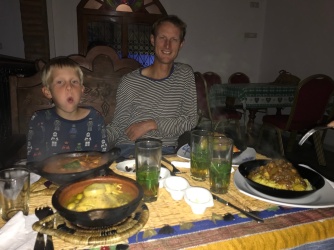 Our first restaurant dinner in Morocco

As we left Tangier, the scene changed rapidly, and we started seeing donkeys on the side of the road, kids selling berries and people walking along. The driving was still a little different, and at one point we saw a truck drive straight off the road, into a rock… In the late afternoon we were arriving in the blue city of Chefchauoen. We parked at the side of the road in the rain, and made our way to our hotel in the old medina. And it turned out it’s really true, the old city is really painted blue. Apparently nobody knows why; maybe the jews started it, maybe it’s to fend off the mosquitoes – but whatever the reason, it’s very pretty, and definitely brings in the tourists. After some walking back and forth through the pretty alleyways, we finally found our hotel in the heart of the medina. The temperature was down to 6 degrees centigrades, and the hotel had no heating, so we were happy to see plenty of blankets on the beds. That night we had our first Moroccan Tagine dinner, delicious. 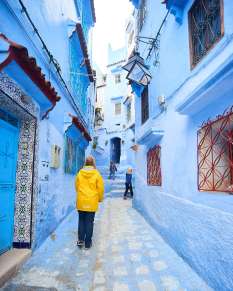 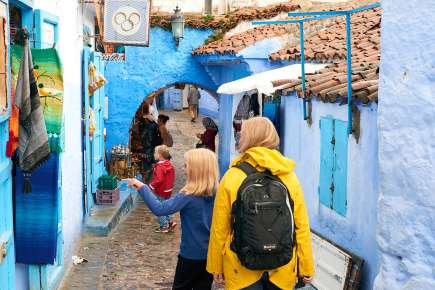 We saw very little tourists, hopefully they show up at other times

The next morning, the car wouldn’t start… Luckily, we were parked on a hill, so Esben was able to get it started while rolling downhill, but not the greatest start to the day.

We wanted to visit one of the old emperor cities, so the next stop was Meknés. Here, we found a big parking place, where we would be able to push the car to get it started the next morning. And then we once again made our way towards the old medina. The centre of Meknés was filled with people selling everything from food to used radios, and it took a long time for us to walk the short distance to our hotel, there was just so much to look at. We spent the afternoon in the medina, it was a little overwhelming at times, with people everywhere, but very cool, especially because there were no tourists at all besides us, and the locals didn’t pay any more attention to us than to everybody else. At night the central square became even more alive, with people taking part in games, eating, looking at the snake tamers and of cause selling everything one can possibly think of. 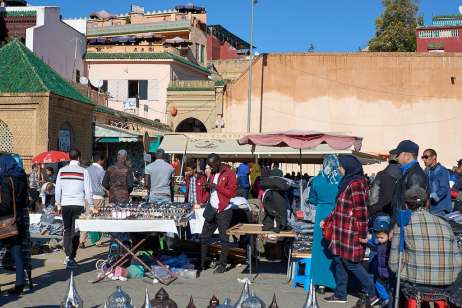 The central square during the day 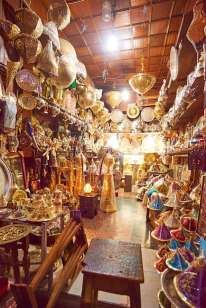 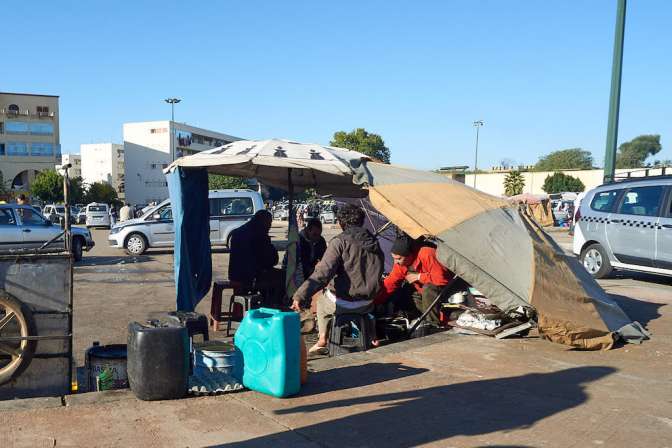 Our home for the night was a beautiful Riyadh in the middle of the medina. From the outside it wasn’t exactly impressive, but once you stepped inside, every room was beautifully covered in old carvings. They even had a small swimming pool, but the water was so cold that Mattis screamed when Esben dipped him in the water… 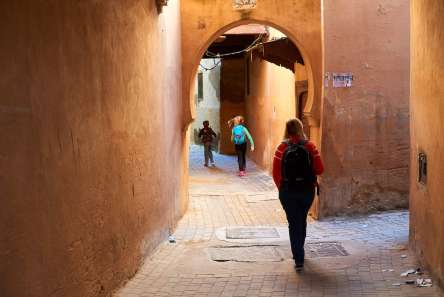 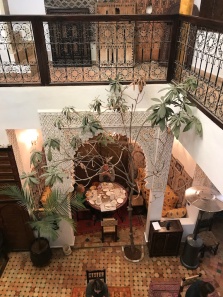 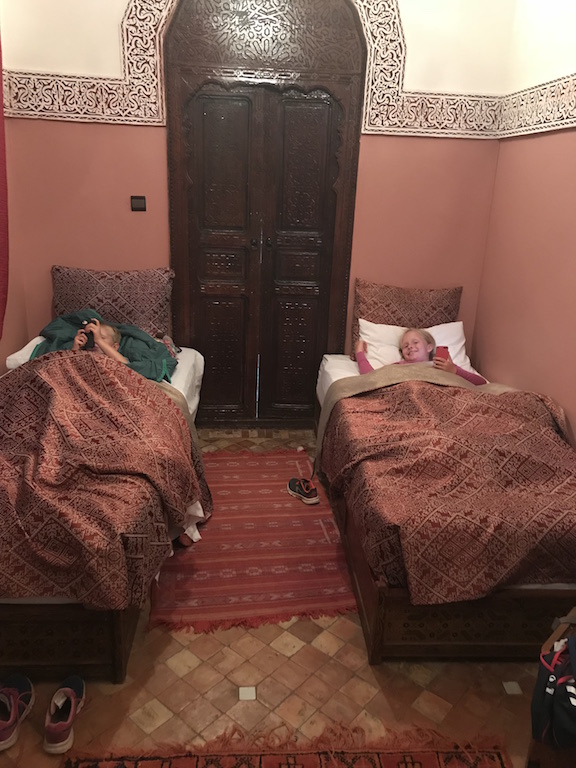 2 thoughts on “Our Moroccan road trip, part 1: Sleeping in medinas”