After waving goodbye to Torbjørn and Elise in Sillery, just south of Reims, we were on our own again, and ready to go into the small canals that would take us to the highest point of our trip across Europe. As we started, we soon got into a routine where Esben would throw the first ropes up over the bollard, hand them to me, and then get the front ropes on, which he controlled. Fairly quick and easy, and after a couple of days we had made it to Vitry-le-Francois, where the “Canal entre Champagne et Bourgogne” begins. This canal is 224 km long with 114 locks, so not many breaks for us on that stretch. We started early in the morning, and were handed a remote control in lock number 1. With the remote, we would signal the lock as we approached it and once ready inside, we would signal for the lock to close and let water in. Mattis soon learned that the remote was great fun, and took charge of signaling the locks. The canal soon took us away from the inhabited parts and into very remote land. It was us, the locks, cars from VNF and the occasional other boat, but they were rare. We sailed past many fruit trees, and picked a few apples, which were too sour to eat directly, but very good for apple cake. We googled for the simplest recipe, but then I remember a friend telling me how easy it is to make apple crumble, and it didn’t take many days before Runa and Mattis were the onboard apple crumble experts. Delicious!

Some nights we just moored to trees on the brink 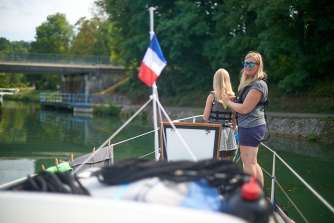 As we reached Chaumont we were halfway in kilometers (but not locks) and took a day off. We walked across the city to see the viaduct of Chaumont. The kids by now know exactly what a aqueduct is, we have crossed many, but a viaduct was puzzling to them – and to the adults too actually. Why is it not just called a bridge? The viaduct in Chaumont was build for the trains to Paris in 1855. Very impressive to see, and we were able to walk along it on the lower levels to the other side of the valley where we had lunch and a cake before going back to Chip-Chip. 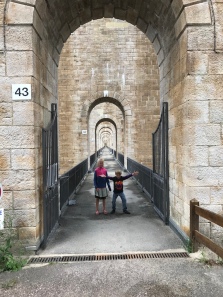 The top of the canal, at a height of 340 meters, was very impressive, with us having to through another 5km tunnel. It felt like quiet the milestone to finally cross over to the south side of France, after our failed attempt at Canal de la Meuse, and it was very cool to start the trip downwards. 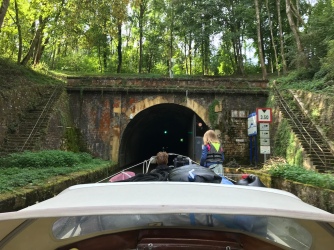 Esben’s dad, Jens, wanted to come visit, and we had come to realize that it was a case of the sooner the better, as we wanted to go fast south once we reached the Saone river. So a couple of days later he took the car and drove down to meet us. Towards noon we called the kids up in the cockpit as we approached the lock, and in the lock, Jens was waiting. Around the corner we stopped for lunch, and afterwards we all sailed on for a few kilometers. Then Jens and the kids got off and walked back to get the car to drive it for our night’s stop. The next couple of days the kids were happy, as Jens took them on trips to the country side during the day, and we then all met up somewhere along the canal in the evening to have dinner together. And it turns out that five people in a Great Dane 28 is fully do-able – at least for a few days 🙂

Almost on the Saone

On the last day of Jens’ visit we finally left the canal and sailed onto the Saone. We docked in Pontailler-sur-Saone, and to celebrate we Jens bought us all delicious pizza for dinner. The next morning we loaded the water maker we had ordered from Jens’ car to Chip-Chip, and then it was time to say goodbye once again. But it was very nice that he took the opportunity to come visit and see what life on the canals is like. 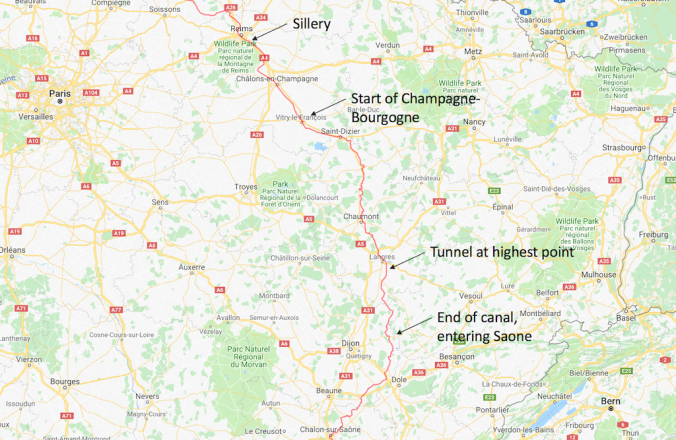 One thought on “Across the top of France”