Thursday morning, Bodil was shoveling snow on the deck of Jensine. Crazy really, considering it was easter in Denmark, and usually the spring flowers are starting to peek out from the dirt. But this year it had snowed during the night – a snowfall that meant that Esben and I had to drive with a speed of 60 km/h from the Elbe until we hit the highway, and eventually arrived in Årøsund at 2am the night before.

A number of people from Jensine had made their way to Årøsund, and though the weather wasn’t exactly perfect for painting, most people started on some work. Esben and Ernst worked on some electrical stuff that only they understood, Brian was in the engine room with Ole, Bodil was scraping paint of the railing. And other people were doing other things that I didn’t see. And me, I was the babysitter. As it was Runa’s birthday, Anne had brought her kids to our circus, while Kathrine had brought her daughter Ingeborg. So the kids were running around playing both inside and outside, while we were keeping an eye on them at the same time as food needed to be prepared for everybody working on Jensine. Runa had wished for hotdogs for her birthday dinner, and luckily, hotdogs were served for lunch that day! 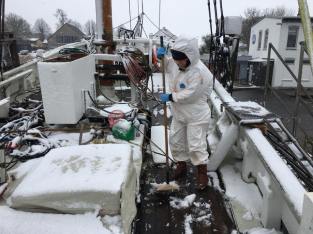 The kids are inspecting the work 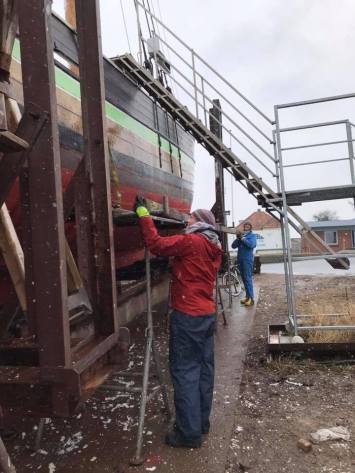 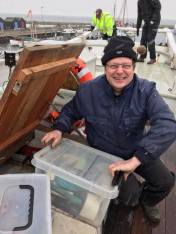 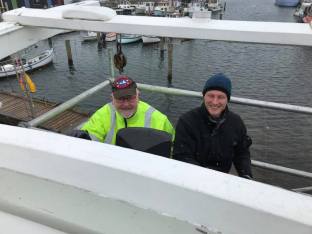 No idea what they are doing – but they look happy

Bodil is removing the old paint

After dinner we had the opportunity to go the last Danish factory making a traditional paint that we will in the future be using on Jensine. It was very interesting to see the old machines they used and hear about the process of making the paint. They had so many beautiful colors that it’s almost a shame that Jensine just needs grey and white. We got a quick course in applying the paint, so Jensine ought to look great in the future. 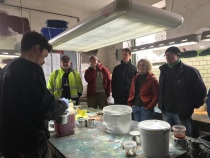 And this is how it’s done

We all had dinner together, and soon everybody were ready for bed. Kathrine and Ingeborg even chose to camp in the car despite of freezing temperatures. But on Friday, the weather was much! better, and the painting could begin. Even more people showed up, and together they (not me, I was still the babysitter…) got Jensine ready so she could go back in the water as planned on Saturday. Esben, of course, made sure to make some pictures of the progress. 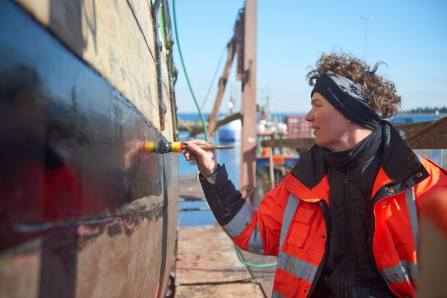 Ruth painting in the sun 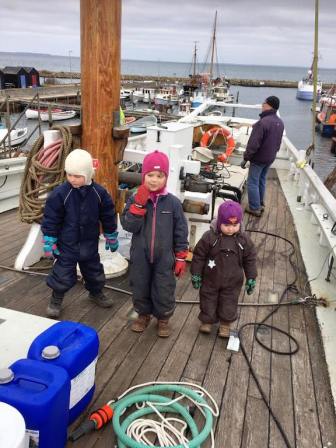 Ready to go in the water

And Esben couldn’t resist and made a small video of Jensine getting back in the water. The kids were on board, and as Jensine made it out of the harbour to turn around before docking, Dicte got a bit worried that Jensine would be making a longer trip with the kids on board. But they got back before mum and dad came to pick them up, so no panic.

One year ago, we arrived in Fernando de Noronha 🇧🇷 after crossing the Atlantic Ocean 🌊 if we had crossed the Atlantic this year, the pandemic would have gone mad during the crossing, and our time in Brazil would have been very different. So grateful that we had this last year in South America and the Caribbean 🌞 #atlanticcrossing #kids4sail #greatdane28 #nomadfamily #fernandodenoronha #langturssejlads #sejlerliv
The last sail of the trip, through the marshes, up the North River to St Mary’s Boat Services. The water may not be bright blue like in the Bahamas, but we find it incredibly beautiful nevertheless.
The end 😢 after a lot of thinking, we have decided to haul out Chip-Chip in St Mary’s, Georgia 🇺🇸 and go home. This summer will be very different than planned.
We fled to the US 🇺🇸 arrived in West Palm Beach after 2,5 days of wonderful sailing from the Exumas 🇧🇸 we have no idea if this was the right thing to do, but right now we’re happy to be here, and people don’t seem to be panicking - yet... #greatdane28 #nomadfamily #langturssejlads #sejlerliv
Carefully feeling our way north in the shallow water behind Cave Cay - we definitely have moments when we appreciate our low draft 😅 #greatdane28 #sailingchipchip #cruisingthebahamas #ruddercutcay #nomadfamily #classicsailboat #langturssejlads #sejlerliv #cruisinglife
We have been tucked in by Lee Stocking Island for some days, hiding from strong winds - good thing we can trust our anchor to keep us in place #rocnaanchor #sejlerliv #langturssejlads #cruisingthebahamas #sailingchipchip #greatdane28 #leestockingisland