We new from the beginning that our Great Dane had previously had issues with small blisters on the rudder. But it sucked a bit that the few small blisters that were there when she was lifted on land in the fall just seemed to increase as the winter went by. As our  Great Dane was built in 1970, and thus is currently 46 years old, with the original rudder still on, it’s really no surprise that rudder issues are starting to show up. But it’s a lot of work.

We obviously want to go sailing this summer, so we aimed to fix the rudder over easter. That would turn out to be a rather optimistic plan… As the number of blisters seemed to have increased over winter, we wanted to take the rudder off of the boat to make it easier to work on it. This was easier said than done, the rudder had clearly not been removed from the boat for a long time. It is kept in place by a plastic piece that is wedged in between the rudder and the hinge (See picture 3 below), which thus needed to come off. But the screw holding it was in so tight that the head of the screw broke before the screw came loose. No problem, the boatbuilder (my dad) cut it. And the rudder was free – once we had figured out how to remove the self steering device that had to come off first. So far so good.

The rudder with spots

My dad is a boatbuilder, kinda comes in handy at times. Here, he is trying hard to turn the screw that holds the rudder in place. 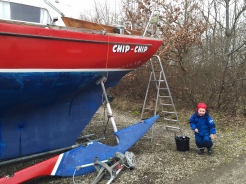 Finally off. Notice the wind steering also had to come off to make room for removing of the rudder.

While I continued with other projects on Chip-Chip, Esben started opening the blisters with a disc sander. As more paint, primer and epoxy was removed it became apparent that the coat of the rudder had little waterways inside of it, and that the places of the blisters were just a little part of the problem. So we (or rather Esben) ended up sanding it down completely. It took about a day. Then the easter holidays were over, and we left the rudder to dry out in my fathers workshop.

Sanding turned out to be the easy step.

When the rudder was sanded down, we could see that someone had previously drilled a hole into it. The area around the hole was wet, so we slowly came to realize that we probably had a water filled rudder. This is rather common in older boats, and very difficult to cure. But we still tried. The old holes were drilled out and a couple of extra ones were added. And when the rudder was left upright over night, water came out of the bottom. It’s of course good that it came out, but it still sucks because it probably means that the inner stainless steel skeleton has been subject to water over a period of time, and without opening up the rudder we will not know how serious the damage is. This is, however, a major operation that we will not take on right now – then we would have a summer working on the boat rather than sailing.

So when the rudder had dried out, we continued to apply an epoxy coating to make the rudder waterproof again. The epoxy is applied in a thin layer, which then needs to dry for at least 24 hours. Once it is dry it is sanded, and new epoxy is applied where needed. This process is then repeated until the result is satisfactorily. A bit of a challenge for us as we live 400 km from the boat. In the hope of preventing new water from entering the rudder, we also applied new fiberglass to the edge of the rudder along the rounding where the propeller is located and around the hinges. Only time will tell if this works out.

Glassing behind the hinges

After applying epoxy
Once the epoxy coating was finished, we applied four coats of primer and finally two coats of anti-fowling. Due to the time intervals between the coats, this process lasted another weekend, but finally we were done and the rudder could go back where it belongs. One step closer to getting back in the water! 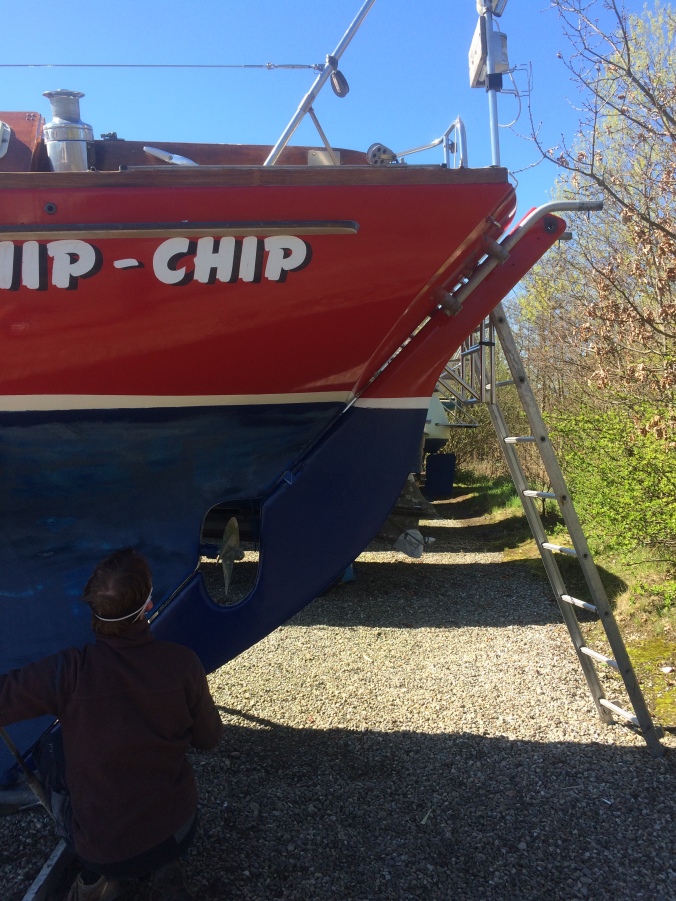 All done – on to painting the rest of the bottom.

2 thoughts on “Renovating the rudder”