In the fall of 2015 I started looking at boats online. Slowly I figured out what type of boat we wanted. First of all not too big and not too expensive. Since we had never had our own boat before we didn’t know if we would like it, so we didn’t want to throw too much money after a boat we were gonna sell again anyways. Also, smaller is easier to handle for two adults. Also, we would like 5 berths and the possibility to close off the v-berth so the kids can be put to bed at night and fall asleep in peace. Since there’s four of us, an extra berth would mean that we could invite somebody else to come along sometimes. And I prefer having a head (or toilet), for obvious reasons. And an inboard motor in good shape, making it possible to sail around Bremerhaven, in the North Sea, where we live without being afraid that the speed is controlled by the strong currents rather than the motor.

In the beginning I looked at the Nordic Folkboat, but as I came to the above conclusions about needs for our boat I moved on to slightly larger types. Also, I figured that it would be good to have a boat that would have the potential to take us a bit further than the Inner Danish Waters – having the possibility to sail to Sweden, Norway or the UK just gives some more freedom. I looked a bit at the Trio 80, and some more at Bianca 27. I liked the Trio 80 for its’ 5 berths and navigation table, but didn’t like the appearance so much. I liked the Bianca 27 for it’s heavy displacement, headroom and looks, but not so much that it only had four berths. In the end we went out to look at an Albin Ballad and a Great Dane 28. Both were from the 1970’ies, with 5 berths and a proven blue water record. The description of the Ballad sounded great, but when we saw it, the boat had obviously not been sailed much lately and seemed damp and uncomfortable down below. So that one was out. The Great Dane, on the other hand, we liked a lot when we saw it. Only problem was that all installations were from the 1980’ies – and the motor was the original from 1975… It was, however, freshwater cooled and started instantly. The guy who had owned the Great Dane had kept her in sailing condition and done a lot to make it possible for him to sail her singlehandedly. Despite of the shortcomings mentioned above we eventually decided to buy the Great Dane Chip-Chip. 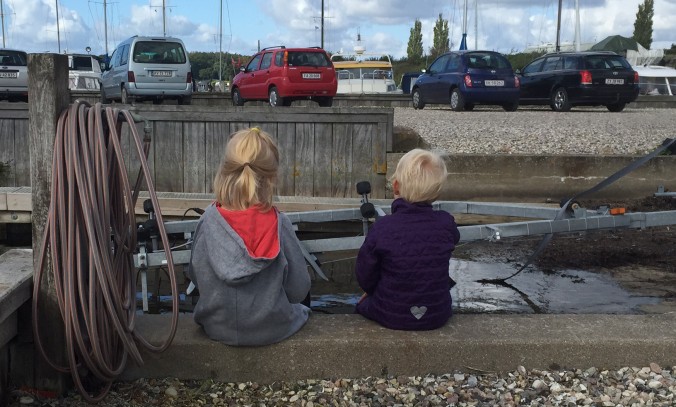 The kids are waiting while the adults talk about boats

We sailed her home in the first week of October on a sunny fall Saturday. The kids came along and we spent a night in the neighboring harbour. It was lovely, and we’re looking forward to going sailing next summer – after some work…

One thought on “Buying Chip-Chip”